Platform it has leant so heavily on these past couple of years, and having ditched its own Symbian software in favor of the pretty, if still emerging Microsoft mobile operating system, it stands to reason that the continued promotion of WP8 is as much the Finnish outfit’s responsibility as it is Redmond company’s. To help keep Lumia smartphones ticking over when connecting to the mains is not an option, Nokia has thrown together a rather beautiful portable charger, which notably, takes the shape of a Windows (Phone) 8 Live Tile.

The square peripheral, known officially as the DC-18 portable USB charger, is beautiful in its simplicity, and since the battery image plastered on the side also lights up in reflection of how much juice is retained within, it could perhaps be considered a real-life Live Tile.

While Windows Phone 8 Live Tiles are very functional and useful, they suffer from the distinct lack of apps for the platform in general. Lumia owners would love to set their Start Screens abuzz with a plethora of Live Tiles pushing information around actively. But as one myself, I’ve learned to accept the fact that, if I do want a busy, informative Start Screen, I often have to download an alternative app that doesn’t entirely suit my needs due to the widespread lack of Live Tile support.

Like Windows Phone itself, the tile-esque charging packs are abundant in aesthetical pleasure, but do have shortcomings of their own. For a block of that size, I would expect a decent capacity in return, but since they can only retain 1,720 mAh, it’s not going to be much more than an emergency lifeline. Essentially, if you’re planning on travelling around, you’d be better off going for something a bit bigger. 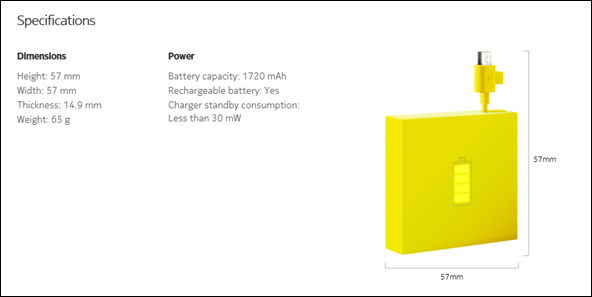 With that said, I do like the design, and since the DC-18 also comes in those vibrant Lumia colors cyan, yellow, magenta, and white, as pictured a the beginning of this post, you’ll certainly be making a statement by picking one of these up. For an estimated price of €15, it doesn’t cost an awful lot, and with a neat, retractable USB connector nicely tucked away from view, it’s a very well-designed product all told.